The Law of Increasing Returns

How many times have you bought something to find the value it generates extends way beyond what you envisaged when you paid for it?

Maybe you simply bought a new shirt and realised you can wear it on a much wider variety of occasions than you first thought - as did your daughter.

Perhaps you bought an air fryer - and discovered that not only is there nothing you can’t cook in that thing, your husband likes to use it too.

Or maybe you hacked a piece of Ikea furniture, creating an entire tiny house out of a child’s bunk bed.

In such cases, the return on your initial investment is increased by adding use cases, users and utility - and the value generated can be way beyond what you initially expected.

In economics, one way to think about exceptional value is enshrined in the Law of Increasing Returns (also known as the Law of Diminishing Cost).

This classic piece of 18th-century economic theory holds that once a favourable level of production has been reached within an industry, the cost to produce each additional unit beyond that level falls as production increases.

It is generally applied to manufacturing industries that can achieve the economies associated with large-scale production. As more and more units are produced, the cost per unit continues to decrease, and every additional investment of capital and labour yields more than a proportionate return.

As we’ve discovered at Outfit, the Law of Increasing Returns also applies to brand automation technology.

Once an organisation implements brand automation, they quickly see a measurable return. And the more the technology is used, the greater the rate of return.

Practically speaking, many organisations start small when it comes to brand automation and begin by trialing the technology in one team or a limited geographic area of the business.

When the business has established that the technology is operating to their satisfaction, and delivering the returns they expect, they often expand its use to additional teams, adding users.

They typically also increase the types and number of assets for which they want to automate production by adding new templates.

And when you have more users in more teams able to access a greater number of responsive templates to automate production, the output - and the return - starts to increase exponentially.

This increases the range of tasks that can be automated across the breadth of an organisation.

When it comes to integrations, not only does Outfit reduce the cost to create assets in those other programs, it can be applied to automate the production of entire asset types without any human intervention.

For example, branded certificates or invoices can be issued, produced and even printed for every entry in a spreadsheet automatically using Outfit, without requiring any production or administrative time.

Not only does this enable organisations to produce more using Outfit, but they generate more value out of the marketing cloud and other tech platforms in which they invest - with minimal ongoing input.

Increasing returns in the real world

One of the benefits of Outfit’s brand automation technology is the ability to track every asset created, edited and exported using the platform.

We can also apply a value - for example, the time it would previously have taken to create that asset without brand automation.

Assuming an average in-house design resource would cost approximately AUD$50 per hour - and knowing that often marketing collateral is set to external suppliers at higher rates - we can calculate the undeniable return on investment that Outfit generates for customers.

This is without even putting a value on the benefits of increased speed to market, reduced error rates, increased visibility for marketing leaders and the value of strengthening brand integrity in-market.

One recent real-world example involved a global technology customer, which improved its ROI from Outfit from more than 200% in its second year to a projected ROI of 700% in its sixth year of use. 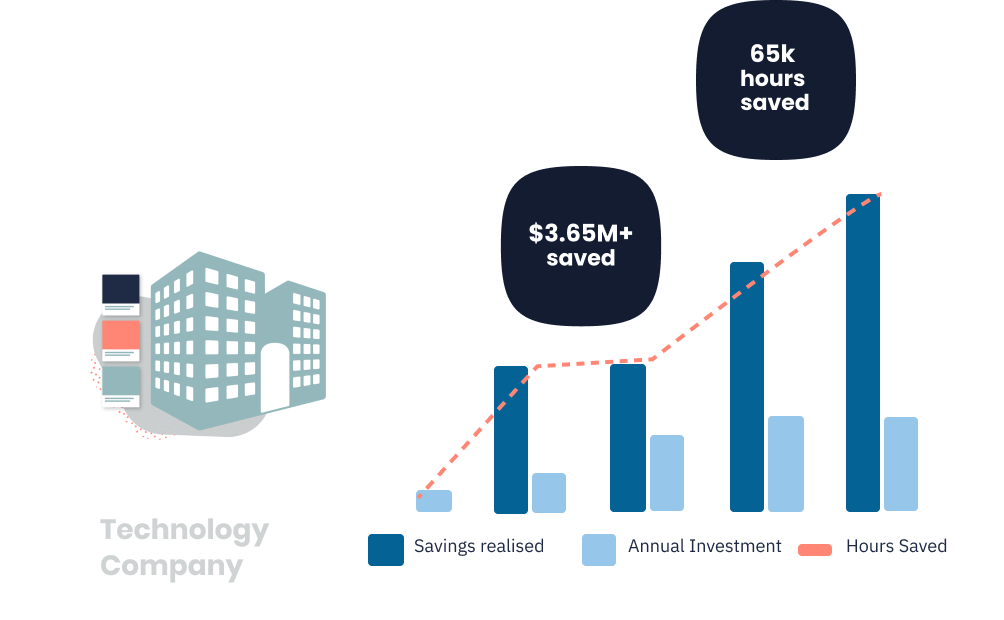 The client has extended the use of the platform to additional teams and use cases, driving up cost savings from automated production.

“We measure the benefits of Outfit just by the requests we aren’t getting any more,” the client said. “I know that every time I see something being built by Outfit, that would otherwise be a custom piece of creative that would have to be taken care of by my team. As that list grows bigger, I know I’m saving more.”

It would be nice if exceptional value was the kind of value generated by every purchase - but then, it would be known as normal value. And the Law of Increasing Returns would probably be called something like “The Law of Minimum Expected Returns”.

We think Outfit offers exceptional ROI and value for marketers and their colleagues in many industry sectors. Please get in touch if you’d like us to show how we can generate exceptional value for your brand.