Australia’s universities are as famous for their marketing budgets as they are for providing world-class education. The Group of 8 unis in 2015 spent a total $76m on marketing, advertising & promotion, an average $9.5m per university. We’re stepping back from world rankings, big budgets and international student acquisition to highlight six university marketing campaigns that have simply stayed in our memories.

The University of Sydney – Leadership for Good Starts Here

‘Leadership for Good’ builds on the nostalgia and idealism of university days for some of the university’s esteemed alumni, from 21st prime minister Gough Whitlam to women’s rights activist and author Anne Summers. Alumni stories and declarations of a vision for good were integrated across outdoor advertising, social media, a short film and the website. Why we love it: At Outfit we are sticklers for embracing diversity under unique branding, doing good for the world and building brand equity, and The Monkeys’ campaign delivered on these three qualities in droves. Creative director Paul Bruce put it best via Campaign Brief, saying it “... uses the equity of the University of Sydney brand to inspire … to instil a renewed sense of pride in being part of the university. It's the first campaign that creates a real emotional connection between past, current and future students delivering a shared vision and purpose for the university community."

Where Great Minds Collide illustrates mind-blowing moments of interdisciplinary collaboration, from accountants working with botanists to measure the carbon dioxide Melbourne’s botanic garden absorbs, to genomics and cancer treatment researchers teaming up in the fight against melanoma. Creative agency McCann say the challenge was to renew appreciation for the university as more than just a cultural icon: “It’s an institution that facilitates the coming together of the best and brightest thinkers to create real-world discoveries that affect us all.”

Why we love it: Where Great Minds Collide stopped us in our tracks with its impactful image of students literally bursting from the university’s buildings. It has stayed with us as an example of a complex concept of the ‘collective power of students’ executed with creativity and consistency across outdoor advertising, cinematography, social media and the university’s digital content platform ‘Pursuit’.

An oldie but a goodie that has stayed in our memories since we saw it on TV, social media and the web in 2011, Know More. Do More. hits on the power of knowledge and what can be done with it. Junior Agency, since acquired by Ogilvy & Mather, later built on the concept to create ‘Know More in 60 Seconds’, which they called a “clever and popular way to connect with a massively diverse audience of potential students and staff, while also raising Griffith’s profile.” 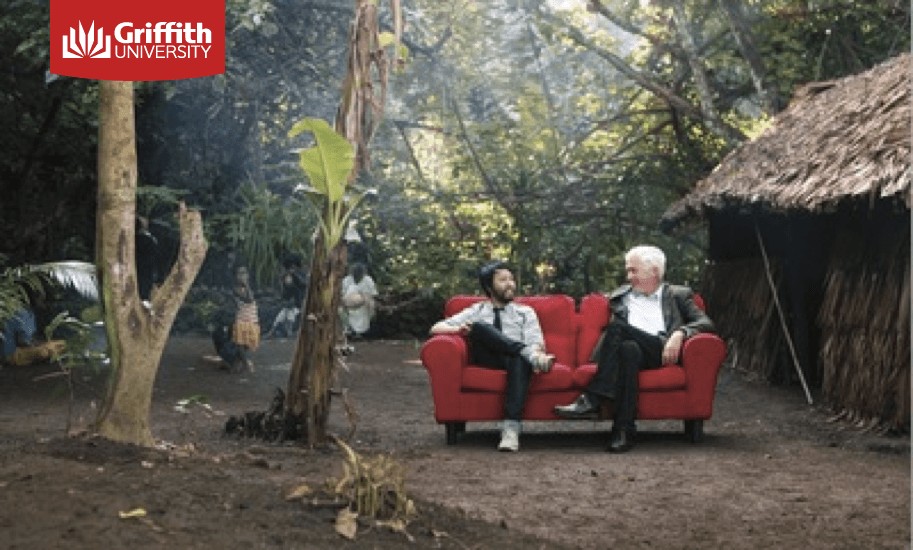 Why we love it: The simple messaging showcasing the value of knowledge and further consistency of the red couch in Know More. Do More. was a creative anchor for the whole campaign, and tied back to Griffith University’s red logo.

QUT – A university for the real world

This was a refreshingly down-to-earth campaign that simply profiles alumni living in the real world. Via B&T, creative agency BCM says the campaign is all about keeping it real: “From the way the graduates tell their own stories, to the content, the shooting style, and real locations … Dean, in particular, is a past brand ambassador for the university, keen to tell the world about his experiences at QUT.” 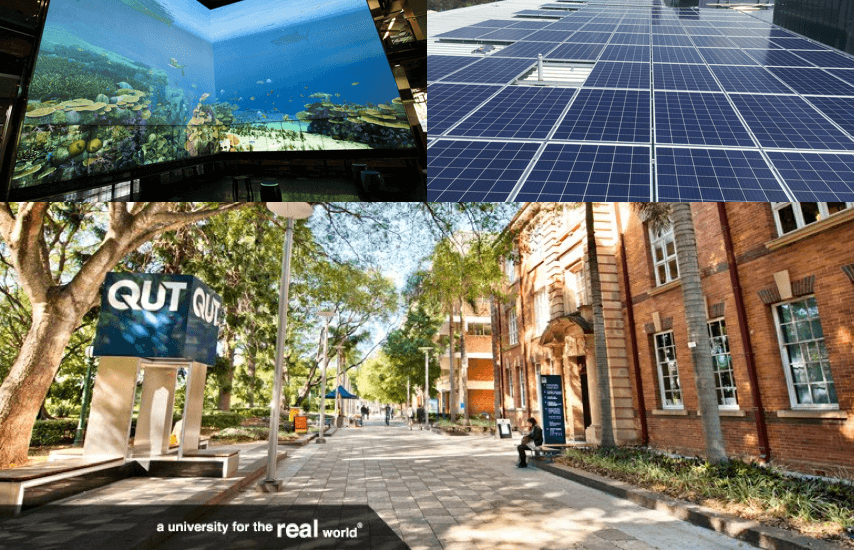 Why we love it: Full disclosure: Outfit has a small community of QUT alumni, but this is our very own hall of fame list so we can include what we like. A university for the real world focuses on what most students want from their university, which is just to be a successful graduate. We also love how the campaign builds on consistent branding, messaging and its ‘real-world, real-graduate’ positioning.

“It’s not about age, it’s about an openness and eagerness to explore the new. Challenging the accepted in search of the exception.” Think Young is an eyeball-sizzlingly bright campaign that demanded our attention last year. Creative agency The Royals say they “... inspiration from the ‘Light and Space’ movement of the ‘60s that prefigured today’s merger of art and technology … to represent the problems of the future and encourages people to use new thinking to create a better tomorrow.” 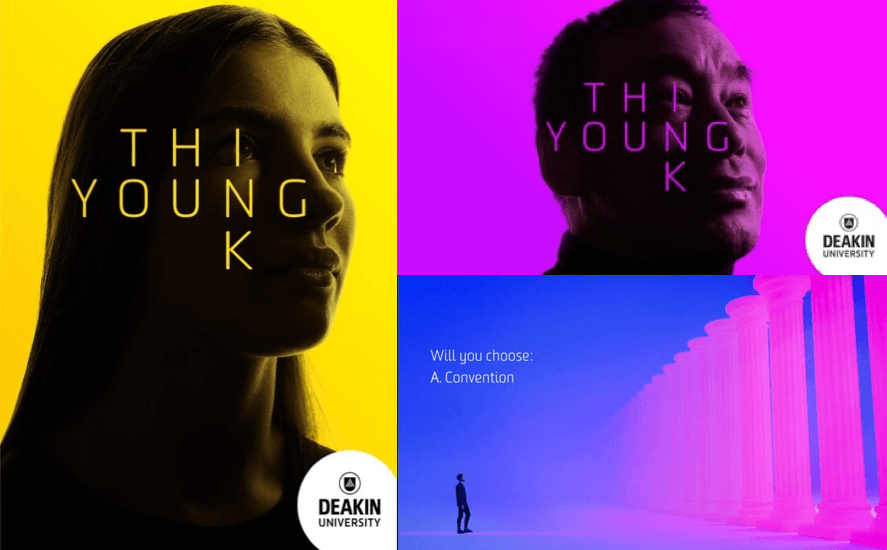 Why we love it: Breaking with the prestigious shades of navy and trademark reds that define some of the universities included here, this innovative, gutsy campaign stays in our memories for its freshness, newness and colours.

Yes, we know. They aren’t technically a university, to not include Respect. Now. Always. in our hall of fame for memorable Australian university campaigns would be an oversight. The result of a national survey involving tens of thousands of Australian university students, this campaign cuts to the heart of sexual assault and sexual harassment with a call to action that demands campuses be safe and respectful spaces.

Why we love it: Uniting 39 Australian universities in one powerfully executed message, this campaign cuts to the heart of good marketing’s ability to effect social change. While most campaigns shared here create a point of difference, we loved seeing universities present a united front on this issue, which was made clear by seamless integration of messaging and collateral across the country’s campuses.

How Outfit Enables Sales and Marketing to Play Nice Together

Can marketing and sales ever be perfectly aligned or is the very thought just a pipe dream?

A strong relationship between franchisors and franchisees is critical in the current climate: one is only as strong as the other.

There’s no doubt the Coronavirus pandemic is driving behavioural change, whether your immediate suburb, region or country is in lockdown, or not. Thanks to COVID-19, many of us are living more local lives.